Want To Know More About Halloween Treats? Read This!

7 Halloween Treats From Around The World

This week’s article is going to cover 7 Halloween treats from around the world! While not exclusively on October 31st, these treats are commonly seen on the countries equivalent to Halloween! Most of these have traditional and symbolic meanings which can be pretty interesting to learn about! I hope you all can enjoy this article if you’d like to see one of these treats in a recipe come let us know! 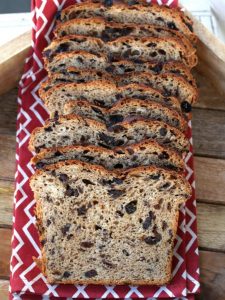 On All Hallows’ Eve, the wafting smell of freshly baked barmbrack (báirín breac in Irish) fills homes all over Ireland. A quick and easy Halloween treat to prepare (especially as far as bread is concerned), this particular loaf is traditionally filled with raisins and sultanas – and best enjoyed with a large slathering of butter and a cuppa. Traditionally, various objects are baked into the loaf – think anything from a piece of cloth to a silver coin. Each object carries a different meaning for the year ahead. Some are good, some not so good… so choose your slice carefully!

Another item to add to your Halloween baking wish list: also known as a soul cake, pães-de-Deus (“Bread of God”) are small, round fluffy ball of coconut tasting goodness. Traditionally eaten on All Saints’ Day (Dia de Todos-os-Santos) on 1 November, ingredients for the batter include a splash of rum, a little lemon zest, and a dash of vanilla. In Portugal, pão-de-Deus is given to children and the poor as a treat when they go from door to door singing and saying prayers for the dead. 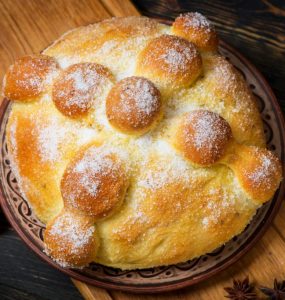 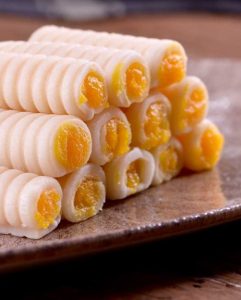 Often called fave dei morti (“beans of the dead”) due to their oval shape, these chewy little Halloween biscuits are eaten by many Italian families on All Souls’ Day (Commemorazione dei defunti) on 2 November. Made with ground-up almonds, pine nuts, cinnamon, and lemon zest, they’re a treat capable of making even a savory person’s mouth water.

Pan De Muerto is a traditional Halloween baked good prepared in the days leading up to the Day of the Dead. It is a soft, sweet bread roll. True to its name, Pan De Muerto is eaten next to a loved one’s grave as a celebration of the life they had, and its decoration takes the shape of a bit of bone-shaped dough on top. The simple recipe can also be flavored with orange-flower water, anise seeds, or other ingredients, all depending on the region you’re in. 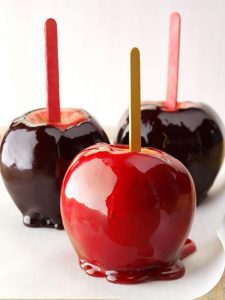 If you haven’t tried this Halloween treat you are missing out! These ’holy bones’ made out of marzipan and are commonly filled with an egg and syrup pudding mixture. While commonly filled with “egg pudding”, different regions can fill their Huesos De Santo with various fillings and are often covered in syrup.

Perhaps one of the most well-known Halloween candies/ treats of all time. Halloween in the States wouldn’t be complete without the candy apple (known as toffee apples in the UK). Covered in a deliciously sticky sugar coating, normally mixed with corn syrup, water, cinnamon, and red food coloring, these apples are an absolute treat. And thanks to the timely apple harvest, there’s no shortage of them. 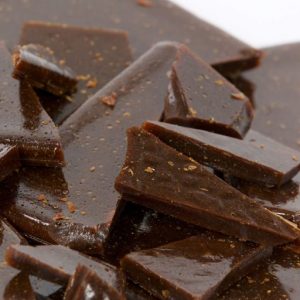 Bonfire toffee is a traditional Halloween sweet treat across the UK, but also on Guy Fawkes Night (November 5th). The darker, spooky-looking toffee is made from black treacle, butter, and sugar. If you’re making it from scratch, prepare to get busy with a hammer or something heavy because you’ll need it in order to dismember a sheet’s worth of toffee and break it up into bite-size chunks!