We all know how to make gravy. Take the drippings of whatever beast you’ve been cooking, add some water, and starch, and cook it down. What results is a delicious gelatinous sauce that people have been relishing for centuries. 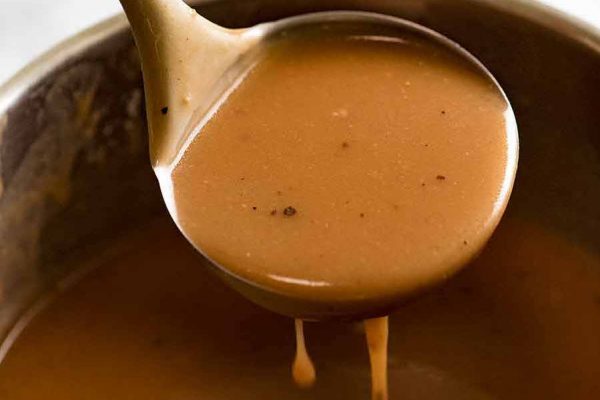 Making gravy by hand might seem easy enough, but in the industrial era, anything that can be made faster has been, and fatty, starchy sauces are no exception.

LIFE magazine ads from the 1960s testify to the proliferation of dry mix gravies. Pillsbury offered a “Daring Offer,” a free sample of any of its gravy mixes to make good on its promise to beat the taste of all competitors. Meanwhile, Durkee’s proclaimed, “All sauce and gravy mixes are made for convenience, but Durkee’s is for dining!”

Even now, one can go into any store and find a plethora of little pouches packed with powder. Add water, heat, stir, and it’s ready. Indeed, the texture, smell, and taste of these mixes are certainly gravy-like. But home-cooking is to industrial food processing what walking is to flying an airplane. The gravy mix isn’t just huge vats of drippings mixed with flour and water. More than a century’s worth of food engineering has gone into making a powder you mix with water and microwave in three minutes to manufacture a smooth gravy.

In many circles, processed foods have come to seem bad, even immoral. What fascinates me, though, is how food engineers look at food. What problems are they trying to solve? What tools do they have at their disposal? What are their points-of-proof and methods? Food engineers don’t think about food the way the rest of us do. For them, it’s a material like steel or drywall, or duct tape. They are concerned with building something and it just so happens that we eat this result. This isn’t the moralizing story that you’ve heard so many times; this is just how gravy mixes developed, their chemistry and technological history.

The story begins back in the 19th century. Philip Thorne filed a patent in 1882 for a floury product that could be mixed with water to create an instant dough. “The object of my invention is to manufacture a new and improved prepared flour, which needs only be mixed with water to form a dough for a biscuit; and the invention consists in thoroughly incorporating butter deprived of its water with flour and baking powder.”

But the instant biscuit dough wasn’t an instant success. Dry mixes didn’t really catch on for decades. It wasn’t until 1931 that Bisquick came onto the market, and not until the 1950s that the baking aid really took off. Cake mixes like Betty Crocker’s followed shortly and exploded in popularity, becoming what the author of Paradox of Plenty, Harvey Levenstein, called “one of the great marketing success stories of all time.” One key trick was that the original mixes just required water, leaving housewives feeling a little left out of the cake-making process. So, General Mills switched up the recipe to require cracking a single egg into the mix, then adding water. And in that way, cakes got made. “By 1950, one theme had come to dominate all else: convenience,” Levenstein notes. 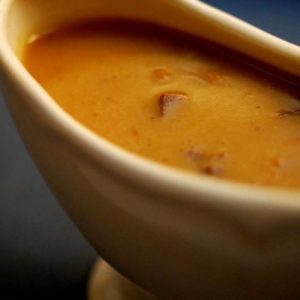 As in baking, so it went with gravies, too. All kinds of gravy mixes came onto the market, proclaiming their greatness. But gravies were actually a more difficult mix to create. Just like home cooks might like to have gravy without having to actually cook meat, the food processing industry needed to eliminate the actual beef or chicken.

You could have gravy without all the trouble of making the meat that would generate the drippings. In a curiously parallel movement, the food processing industry also wanted to eliminate actually cooking meat to generate that meaty gravy flavor. In fact, the industry actually needed to. It would be far too expensive to cook a bunch of meat, keep the drippings, and throw away the rest.

“The gravy mixes are a little more sophisticated because the flavor from a gravy mix may be a beef gravy, but it’s never been near a cow,” said Gary A. Reineccius, a food scientist at the University of Minnesota. “To me, some of the real innovations that have occurred in gravy have been in the flavoring systems.”

Initially, a big chunk of that flavoring came from a wonderful chemical initially developed in Japan called monosodium glutamate, or as you probably know it, MSG. For pennies on the dollar, MSG could approximate the taste of meat. Throw some spices in and you could create something that the American consumer would buy. Food Technology magazine reported in 2008 that 40 percent of American households used some sauce or gravy mix. It doesn’t hurt that these gravy mixes are almost preposterously cheap. The cost was the whole impetus behind making a gravy mix in the first place. Relative to the canned gravy, the dehydrated nature of the mix means that it’s lighter and therefore cheaper to ship and package.

Once the technology to dry and grind vast slurries of gravy was available and decent flavorings had been created, the competition moved to other areas. The great American innovation machine went to work on a problem that had plagued mankind for centuries: lumpy gravy. You see, the problem with all gravies is that when you add starch to a watery, fatty admixture, the starch tends to clump together. The flour inside the lumps becomes isolated from the mixture. Because the water can’t reach it, it never dissolves. Home cooks can prevent this by simply stirring the mixture, but that required ” considerable skill,” as General Mills’ Harold Keller put it in a 1958 patent application.

Keller’s solution to the lumping problem was to include a leavening agent that helped break up the clumps as they were forming. But Keller did not have the final word. Lumps still formed, particularly when the mixes were added to boiling water. The best way to keep them from forming,  as Kari Bos of Carnation describes in a 1982 patent, was to slowly heat the mixes. Making lump-less gravy was still a two-step process.

So, Bos suggested adding maltodextrin into the gravy mix. The long chain of glucose molecules was able to reduce the number of lumps substantially if mixed with starch in precisely the right ratio, as he demonstrated in his patent’s key chart. Around maltodextrin to starch ratio of 1:1, the lumps disappear. But in the 1980s, the patent trail for gravy mixes goes cold. Flavor scientists, we’re sure, have continued to improve. Low-fat and low-carbohydrate versions have been created. But by and large, the gravy mix form has stabilized. The ingredients haven’t changed much, except some brands like McCormick’s no longer use MSG.

This meal does require biscuits, so be sure to either buy some or make them yourself! We’ve had an article going over how biscuits have changed over time and it includes a recipe on how to make your own! You can find it here. 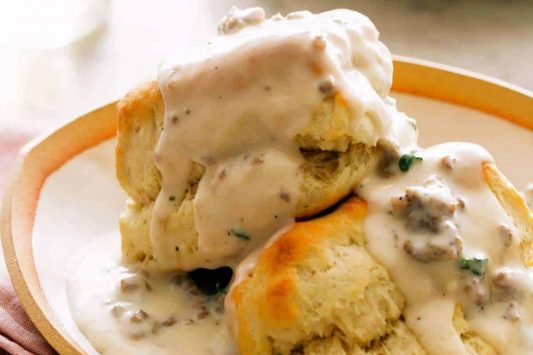