The Evolution of Biscuits

The Evolution of Biscuits

All over the world and throughout history, biscuits have been around in one shape, form, size, or another! Over time the ingredients and flavors have changed (and have changed based upon what region of the world you’re in. Some areas have access to ingredients that other places do not.) Biscuits have been a part of countless battles, wars, meals, feasts, and can be found in some museums! This article will be covering the more iconic evolutionary stages of biscuits and will teach you how you can make your own biscuits! Enjoy the read! 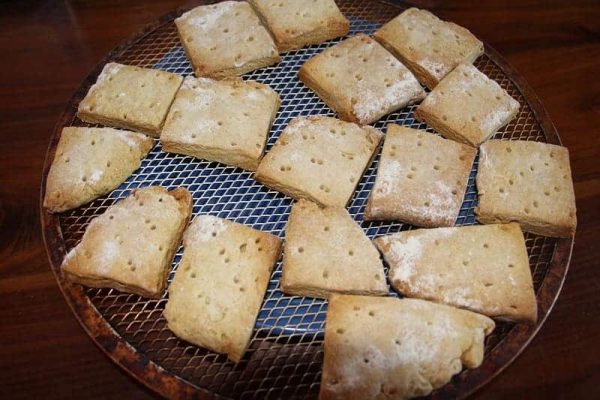 The Staple Of The Ages (Hardtack)

Hardtack is essentially a hard cracker that is made from flour, salt, and water. It came about several centuries ago when proper food storage was scarce and the more durable a food was, the better. Even though it’s been around since the days of Egyptian Pharaohs, it’s more well known for its importance in the Civil War. Sailors and soldiers were the most known consumers of hardtack, as the hard biscuit-like food was cheap to make, easy to transport, and held up in almost any environment.

The secret to its long shelf life is the lack of moisture in the food itself. The first versions of hardtack were baked up to four separate times and then left to sit out for days to draw out every last bit of moisture. If they remained dry, they would keep indefinitely. There are still remnants of Civil War hardtack that are edible today! How’s that for a shelf life!

Hardtack is best known for being part of the daily rations for soldiers during the Civil War. It was the main sustenance for Union soldiers, along with some sort of salted meat. Confederate soldiers consumed it less frequently due to flour shortages in the south, but it is still considered a major player in the nourishment of Civil War soldiers. In fact, many of the rations that contained hardtack in the earlier days of the Civil War were leftovers from the Mexican-American War nearly 15 years earlier!

Little known to many, hardtack’s existence dates back even farther than the 1860s. Egyptian mariners called it dhourra cake, Roman legions called it buccellum, and the crusaders of King Richard I referred to it as Muslin bisket. The first mass production of hardtack took place in the 1660s and the prepared biscuits were given to soldiers in the Royal Navy. 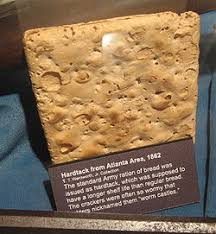 As mentioned previously, hardtack was a regular ration for Union soldiers and an occasional ration for Confederate soldiers during the Civil War. According to John Billings (a Union soldier in the 10th Massachusetts Volunteer Light Artillery Battery), soldiers received about 9 to 10 pieces per day. Hardtack was given to the men in one of three conditions: first, the hardtack may have been wet, in which case it was also moldy and unable to be eaten; second, it may have been infested with maggots or other insects, though this version was still consumed in most instances; and third, it was simply too hard to bite into. Hardtack was so dry and hard that many soldiers broke their teeth trying to bite into it, so they would smash it with their fists or with the butt of their rifle to break it into pieces that were more easily consumed. The crushed pieces were often put into soups or stews or soaked in cold water and then fried in the fat of whatever meat was available. Some men would toast a piece, only to grind it up and make a sort of coffee out of it. If butter was available, hardtack was enjoyed happily with a smear of butter!

Fast forward to the antebellum South. Biscuits were still tough and flat and typically were only eaten only in wealthy homes. Most people living in the South at the time ate cornbread instead. That’s because most mills in the South were great at grinding corn but not at processing wheat. So only the rich could afford flour, which often had to be shipped in from northern states. Beaten biscuits, which could be considered the precursor to the modern Southern biscuit, were only a little better than hardtack. They included fat like butter or lard, but still, no leavening agent, so beaten biscuits remained flat and only slightly lighter because the dough required 15 minutes of kneading or beating. 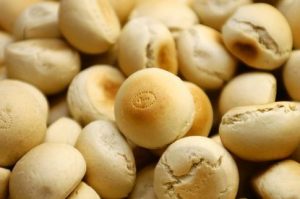 “Beaten biscuits: This is the most laborious of cakes, and also the most unwholesome, even when made in the best manner. We do not recommend it; but there is no accounting for tastes. Children would not eat these biscuits-nor grown persons either, if they can get any other sort of bread. When living in a town where there are bakers, there is no excuse for making Maryland biscuit. Believe nobody that says they are not unwholesome. . . . Better to live on Indian cakes.” – Eliza Leslie

It wasn’t until several 19th-century innovations came along that we got what’s now recognized as a Southern biscuit. First off, better flour mills and an increased wheat production dropped the price of flour low enough that poorer Southerners could actually afford to buy flour. Flour used to be incredibly expensive and usually only the richer families had it, so the southern citizens turned to cornmeal to make their bread and meals, hence why cornbread is so well-known in the southern US states. There also was a huge scientific breakthrough that lead to the development of chemical leavening agents, such as pearl ash (potassium carbonate), potassium bicarbonate, and sodium bicarbonate (Baking Soda) helped biscuits reach literal new heights, without yeast or beaten eggs. 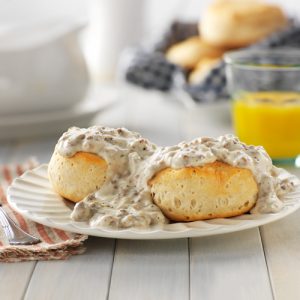 We’ve talked about the evolution of biscuits, now let us talk about one of the most recognized biscuit based meals as well as teach you how you can make your own biscuits! Biscuits and gravy have been around as long as this country. Born of necessity and frugality, the dish seems to have become commonplace during the Revolutionary War. Biscuits and gravy answered the need for a hearty, high-calorie breakfast for people who worked hard, but didn’t have much money on hand.

The milk-based gravy was used to stretch the meat, and biscuits themselves could be made with a variety of fats. Butter was the preferred fat, particularly if the family had a cow or ready access to dairy; and if not, lard or drippings were frequently used. At first, biscuits were nothing but hard tooth-breaking lumps of flour and water, but eventually, they evolved into the light and flaky tender-crumb variety made with baking powder that we enjoy today. Popular across the country, this dish is a particular favorite in the Southern United States, and you’d be hard-pressed to find a restaurant where it wasn’t on the menu.

Proper Southern-style biscuits and gravy begin with homemade buttermilk biscuits. If you are planning to make this dish with grocery store biscuit dough in a pressurized cardboard tube, you will be sacrificing flavor and texture (not to mention authenticity) for convenience. As for the gravy, it will only be as good as the sausage you use. Buy a bulk breakfast sausage that you like, one that’s well seasoned, and has a decent ratio of fat to lean. Avoid the budget varieties that are almost all fat. The buttermilk you use is also important as the acidity that results from a high-quality product reacts more fiercely with baking powder, making a much lighter biscuit.

Make Your Own Biscuits! 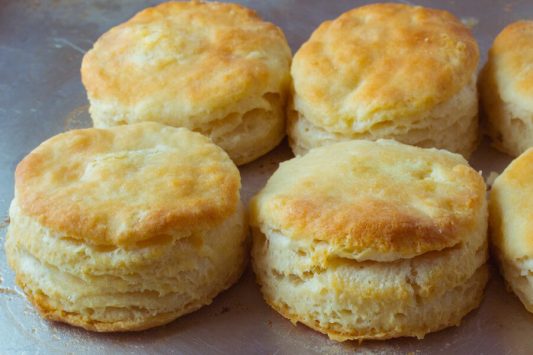