All About Saint Nick and His Evolution

All About Saint Nick and His Evolution

When listening to the radio in December, it’s unlikely to hear holiday songs singing the praises of Krampus: a half-goat, half-demon, horrific beast who literally beats people into being nice and not naughty. Krampus isn’t exactly the stuff of dreams: Bearing horns, dark hair, fangs, and a long tongue, the anti-St. Nicholas comes with a chain and bells that he lashes about, along with a bundle of birch sticks meant to swat naughty children. He then hauls the bad kids down to the underworld. 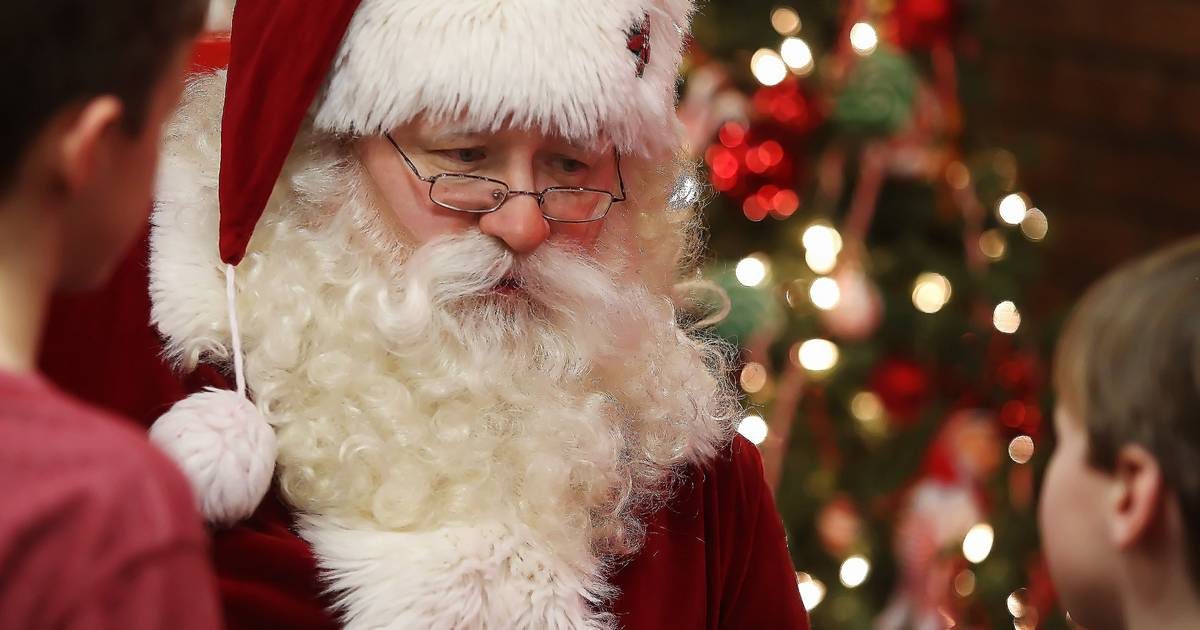 Who Is Saint Nicholas?

St. Nicholas was a Bishop who lived in the fourth century, in a place called Myra in Asia Minor (now called Turkey). He was a very rich man because his parents died when he was young and left him a lot of money. He was also a very kind man and had a reputation for helping the poor and giving secret gifts to people who needed them. There are several legends about St. Nicholas, although we don’t know if any of them are true!

The most famous story about St. Nicholas tells how the custom of hanging up stockings to put presents in first started! It goes like this:

There was a poor man who had three daughters. The man was so poor that he did not have enough money for a dowry, so his daughters couldn’t get married. (A dowry is a sum of money paid to the bridegroom by the bride’s parents on the wedding day. This still happens in some countries, even today.) One night, Nicholas secretly dropped a bag of gold down the chimney and into the house (this meant that the oldest daughter was then able to be married). The bag fell into a stocking that had been hung by the fire to dry! This was repeated later with the second daughter. Finally, determined to discover the person who had given him the money, the father secretly hid by the fire every evening until he caught Nicholas dropping in a bag of gold. Nicholas begged the man to not tell anyone what he had done because he did not want to bring attention to himself. But soon the news got out and when anyone received a secret gift, it was thought that maybe it was from Nicholas.

Because of his kindness, Nicholas was made a Saint. St. Nicholas is not only the saint of children but also of sailors! One story tells of him helping some sailors that were caught in a bad storm off the coast of Turkey. The storm was raging around them and all the men were terrified that their ship would sink beneath the giant waves. They prayed to St. Nicholas to help them. Suddenly, he was standing on the deck before them. He ordered the sea to be calm, the storm died away, and they were able to sail their ship safely to port.

St. Nicholas was exiled from Myra and later put in prison during the persecution of Christians by Emperor Diocletian. No one really knows when he died, but it was on 6th December in either 345 or 352. In 1087, his bones were stolen from Turkey by some  Italian merchant sailors. The bones are now kept in the Church named after him in the Italian port of Bari. On St. Nicholas feast day (6th December), the sailors of Bari still carry his statue from the Cathedral out to sea, so that he can bless the waters and so give them safe voyages throughout the year. in 1066, before he set sail to England, William the Conqueror prayed to St. Nicholas asking that his conquest would go well. 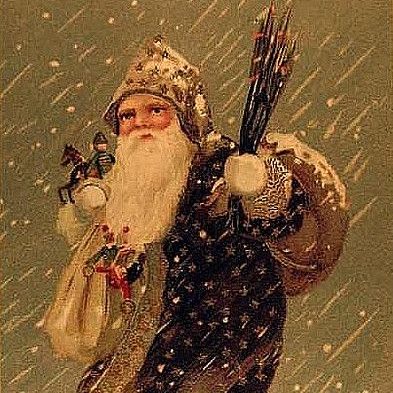 In the 16th Century in northern Europe, after the reformation, the stories and traditions about St. Nicholas became unpopular. But someone had to deliver presents to children at Christmas, so in the  UK, particularly in England, he became ‘Father Christmas’ or ‘Old Man Christmas’, an old character from story plays during the middle ages in the UK and parts of northern Europe. In  France, he was then known as ‘Père Nöel’.

In some countries including parts of  Austria and  Germany, the present giver became the ‘Christkind’ a golden-haired baby, with wings, who symbolizes the newborn baby Jesus. In the early USA, his name was ‘Kris Kringle’ (from the Christkind). Later, Dutch settlers in the USA took the old stories of St. Nicholas with them and Kris Kringle and St Nicholas became ‘Sinterklaas’ or as we now say ‘Santa Claus’!

Many countries, especially ones in Europe, celebrate St. Nicholas’ Day on 6th December. In The Netherlands and some other European Countries, children leave clogs or shoes out on the 5th December (St. Nicholas Eve) to be filled with presents. They also believe that if they leave some hay and carrots in their shoes for Sinterklaas’s horse, they will be left some sweets. St. Nicholas became popular again in the Victorian era when writers, poets, and artists rediscovered the old stories.

In 1823 the famous poem ‘A Visit from St. Nicholas’ or ‘T’was the Night before Christmas’, was published. Dr. Clement Clarke Moore later claimed that he had written it for his children. (Some scholars now believe that it was actually written by Henry Livingston, Jr., who was a distant relative of Dr. Moore’s wife.) The poem describes St. Nicholas with eight reindeer and gives them their names. They became really well known in the song ‘Rudolph the Red-nosed Reindeer’, written in 1949. 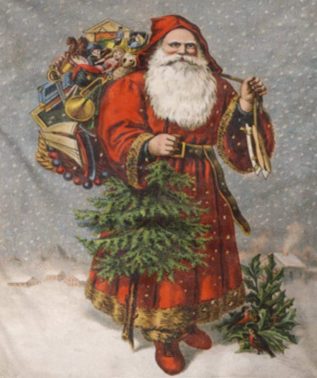 Did you know that Rudolph and Santa’s other reindeers might well be all girls!? Only female reindeer keep their antlers throughout winter. By Christmas time most males have discarded their antlers and are saving their energy ready to grow a new pair in the spring.

The UK Father Christmas and the American Santa Claus became more and more alike over the years and are now one and the same. Some people say that Santa lives at the North Pole. In Finland, they say that he lives in the north part of their country called Lapland.

But everyone agrees that he travels through the sky on a sled that is pulled by reindeer, that he comes into houses down the chimney at night and places presents for the children in socks or bags by their beds, in front of the family Christmas tree, or by the fireplace. Most children receive their presents on Christmas Eve night or early Christmas morning, but in some countries, they get their presents on St. Nicholas’ Eve, December 5th.

St. Nicholas putting the bag of gold into a stocking is probably where the custom of having a tangerine or satsuma at the bottom of your Christmas stocking came from. If people couldn’t afford gold, some golden fruit was a good replacement – and until the last 50 years, these were quite unusual fruits and so still special! The biggest Christmas stocking was 51m 35cm (168ft 5.65in) long and 21m 63cm (70ft 11.57in) wide (from the heel to the toe). It was made by the volunteer emergency services organization Pubblica Assistenza Carrara e Sezioni (Italy) in Carrara, Tuscany, Italy, on 5th January 2011. That’s a lot of presents!

There’s a Christmas Urban Legend that says that Santa’s red suit was designed by Coca-Cola and that they might even ‘own’ Santa! This isn’t true at all. Long before coke had been invented, St Nicholas had worn his Bishop’s red robes. During Victorian times and before that, he wore a range of colors (red, green, blue, and brown fur) but red was always his favorite!

In January 1863, the magazine Harper’s Weekly published the first illustration of St Nicholas/St Nick by Thomas Nast. In this, he was wearing a ‘Stars and Stripes’ outfit! Over the next 20 years, Thomas Nast continued to draw Santa every Christmas and his works were very popular indeed (he must have been very good friends with Santa to get such good access!). This is when Santa really started to develop his big tummy and the style of red and white outfit he wears today. Nast designed Santa’s look on some historical information about Santa and the poem ‘A Visit from St. Nicholas’. On January 1st, 1881, Harper’s Weekly published Nast’s most famous image of Santa, complete with a big red belly, an arm full of toys, and smoking a pipe! This image of Santa became very popular, with more artists drawing Santa in his red and white costume from 1900 to 1930.

Santa was first used in Coke adverts in the 1920s, with Santa looking like the drawings of Thomas Nast. In 1931, the classic ‘Coke Santa’ was drawn by artist Haddon Sundblom. He took the idea of Nast’s Santa but made him, even more, larger than life and jolly, replaced the pipe with a glass of Coke and created the famous Coke holding Santa! Coca-Cola also agree that the red suit was made popular by Thomas Nast and not them! Coke has continued to use Santa in their adverts since the 1930s. In 1995 they also introduced the ‘Coca-Cola Christmas truck’ in the ‘Holidays are coming’ TV adverts. The red truck, covered with lights and with the classic ‘Coke Santa’ on its sides is now a famous part of recent Christmas history.