Africa is known for its scorching temperatures and dry spells that can last for what seems months. Combine that with thin layers of soil and you can begin to see a problem when it comes to growing produce. To combat this harsh climate, humanitarian aid groups have developed various sustainable gardening techniques that allow families and villages to grow food throughout the year. One such technique is what’s become known as keyhole gardening.

So what is keyhole gardening? In its simplest form, a keyhole garden is essentially a raised-bed planter with several important modifications. These modifications include its circular shape, a composting bin at the center, as well as the integration of recyclable material, like cardboard and newspaper.

The benefits of the keyhole garden design are plentiful. The inclusion of cardboard and newspaper increases the levels of carbon, nitrogen, and air in the soil. The composting bin helps keep the soil moist and continually provides nutrients to the plants. Waste is being reduced by recycling organic food scraps and paper products that might otherwise end up in the trash. 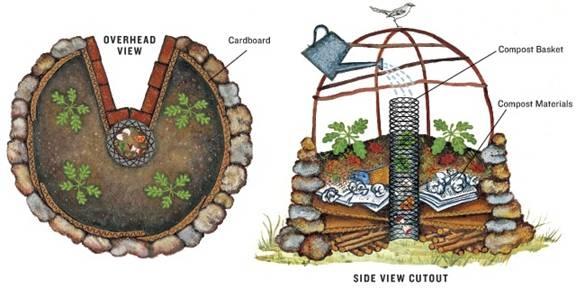 One of the oldest and most important root crops in Africa is the yam, a starchy plant sometimes mistakenly referred to as the sweet potato. Grown primarily in tropical or subtropical regions, yams are a reliable staple crop that can be stored easily for later use. Although rather low in nutritional value, they are often grown in combination with vegetables and other foods that help provide an adequate balance of nutrients.

In some parts of Africa—especially western, central, and eastern Africa—cassava is an important food crop. This starchy root plant is the source of tapioca. Although once regarded as only an emergency crop for use during periods of famine, cassava is now planted extensively and has even replaced the cultivation of yams in some areas. Suitable for growing in a wide range of climates, cassava can be left in the ground in both wet and dry seasons much longer than most other crops.

Two other important African root crops are potatoes and plantains. Found mainly in the drier, Mediterranean-type climates of  North Africa and southern Africa, potatoes are also grown in the higher elevations of other regions. Plantains, a relative of bananas, have been an important crop in Africa’s tropical rain forests for centuries. Used mostly for cooking, some varieties of plantains are also brewed to produce beverages. Another plant of the banana family, the enset, is sometimes called the false banana. The enset does not produce an edible bunch of fruit like its cousin, the banana. Instead, its stems are used to make fibers and ropes, while its seeds are used for ornamental and medicinal purposes. Found wild in several areas, the enset is cultivated only in the highland regions of  Ethiopia, where its starchy stem is pounded, cooked, and served as a staple food. 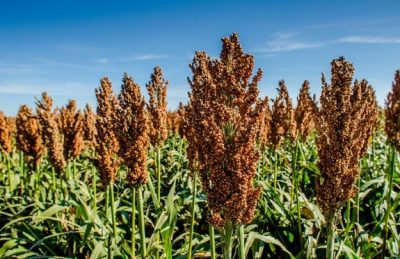 The most widespread of African grains—and the most important food in the history of the continent—is sorghum. Originally developed from wild grasses native to the savanna regions of northern Africa, sorghum has been grown for food for at least 7,000 years. In some areas, the cultivation of this grain probably developed in close association with livestock grazing.

The spread of sorghum, however, is linked to the development of iron industries about 2,000 years ago. Iron tools proved especially useful for breaking and clearing the hard, dry soils of the savanna regions, as well as for weeding and harvesting crops. Another important grain crop of the savanna regions of Africa is millet. Certain species of millet — including one called “hungry rice” — are especially important during times of famine because they can survive fairly long periods of time with little rainfall.

In some areas of Africa, the traditional cultivation of sorghum and millet has been replaced by the growing of maize, or corn. Brought from Central America, maize was grown in very limited amounts at first and only in a few coastal areas of  West Africa. During the 1900s, however, the cultivation of maize spread and it became important as a staple food crop, especially in eastern and southern Africa. Maize is also grown extensively in parts of North Africa, primarily in areas under irrigation. Farmers who practice intensive cultivation of maize often use mechanical plows and artificial fertilizers. 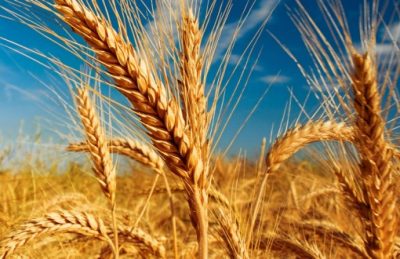 Two other grain crops, wheat, and barley are raised on a limited scale. Once restricted to the lower  Nile Valley and the highland regions of  Ethiopia, wheat and barley have been introduced to highland areas of southern and eastern Africa. Irrigation and the development of new plant strains have also allowed wheat cultivation to spread to some savanna regions. Wheat and barley are grown primarily to make flour. Two main species of rice are grown in Africa. Common rice originated in Southeast Asia and probably reached eastern Africa more than 1,000 years ago by Indian Ocean shipping routes. The other species,  Guinea rice, is native to wet areas of the Guinea coast and upper Niger River region of West Africa. Rice does not require grinding and can be stored and transported quite easily. In towns along the eastern coast of Africa, rice gained prestige as food for travelers and guests.