Our first outdoor grow of the 2019 season is here! For this outdoor grow, we chose to use seeds we have been collecting for over 15 years! That is a lot of different possible genetics.  Over the years we have smoked everything from kush to cheese and around the world again. Ever so often we found a nice dark seed. It was rare, but we saved them. These seeds were not labeled when we collected them, so we are hoping to be able to identify them during the flowering phase.

We only used Fox Farms: Ocean Forest in this grow. When we were looking around about soil this was recommended for beginner growers. Ocean Forest® is a powerhouse blend of aged forest products, sphagnum peat moss, earthworm castings, bat guano, fish emulsion, and crab meal. 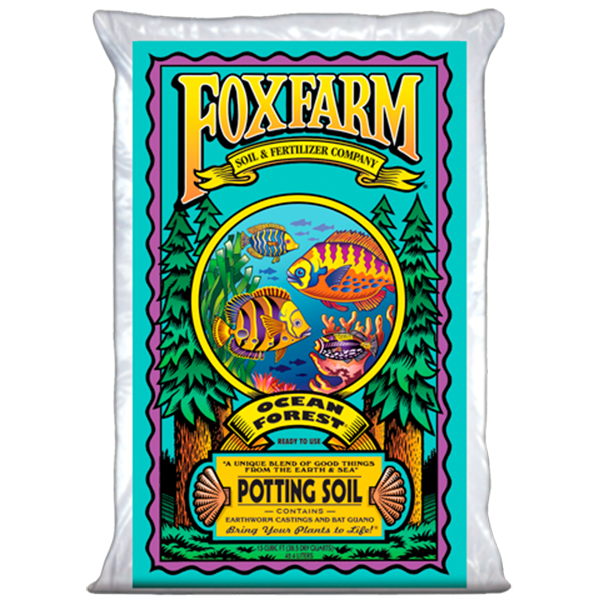 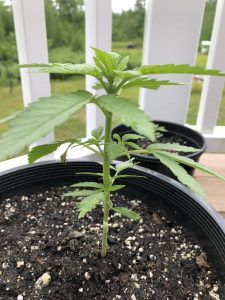 This plant was part of the first batch to be moved out of germination.  All plants were germinated inside until they had at least 3 top leaves.  Once the plant was stable we moved it to a 1-gallon pot and outside into the growing space.

We want the plants to get 18 hours of full sunlight a day to make sure they are in veg. There was really no trimming or low-stress training in this process. These phases last until the light is down to about 12 hours.

At first, the plants did not need much watering. Ever 2 to 3 days was enough. As we moved them up in larger soil containers they required more water to reach the plant root system.  We started off with RO/DI water with a PH of about 6 to 6.5 and added some of the following. We made sure to apply the following items on a 4-day schedule.

These were mixed as the direction stated on the bottle or the online feeding chart. We started with Big grow and Soil Nutrients first, Tiger bloom is not added until later in the grow. The directions were simple, we added more of some and then we adjusted the amounts as per how many hours of light there was in a day as we went. It is important to note that when adding anything into your soil or plants, pay attention to how the plant responds. Ask yourself key questions about what is going on, and remember to go slowly and not overdo the amounts.

The chart below shows the amounts per hour of lights. We used 1-gallon jugs as they were the correct size for the chart. This chart is for soil and not hydro. 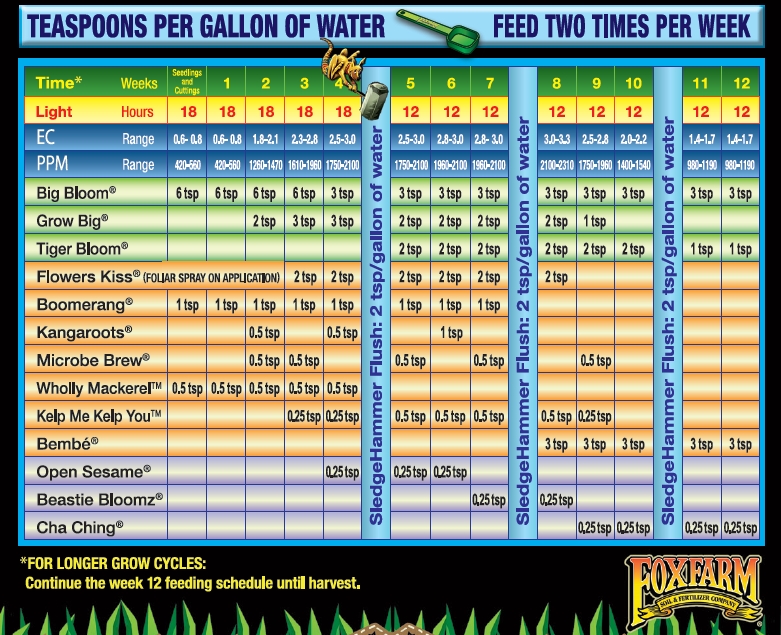 Normal Watering was done every 1 to 2 days until the plants started to drink more and the topsoil appeared dry. While flushing was only water, to clean all the nutrients out of the soil.

It is good to note, that the plant will droop if you are not watering enough. If plants curl away from the soil you may be watering too much. Its something you will get the hang of. 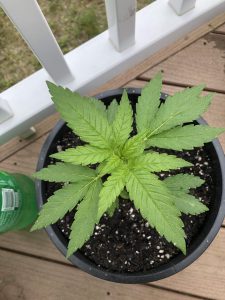 It is important to note that every other watering also contained “Fish Shit” or “Molasses“. These were added to help build up the soil microbes. While we stopped using “Fish Shit” due to the fact it might attract skunks, we think its a good product. Always watch and make sure anything you put into the soil to build microbes does not attract unwanted pests or fungi.

This plant has been topped multiple times. We have selectively cut the stem in order to split the bud site into two. We have recently split that top again to create two more bud sites, in addition, prime bud sites that had leaves blocking them were either moved out of the way, defoliated, and lolloped. This was to help form a canopy and redirect growth to areas of the plant we wanted to produce. 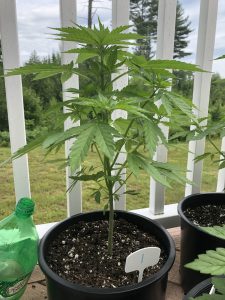 Lolloping is the act of removing the lower leaves and small branches that won’t produce what we need or will be difficult to harvest due to a smaller size. We remove these sections to keep the nutrients going to what we are going to harvest only. This is considered good housekeeping and will help keep pests away. It’s also will make it easier to inspect for pests, such as caterpillars. Caterpillars will eat into your bud and lay eggs. These will hatch and hollow out your bud and kill it. This will also be a sign to look for each day.

This plant is now established and we are waiting for it to Flower and show its sex. We want to remove males from the farm so we do not get any pollination in the plants. While we do not know what strains we have, we do hope to be able to identify a few to take clones from. 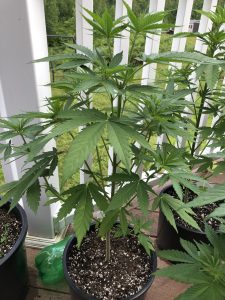 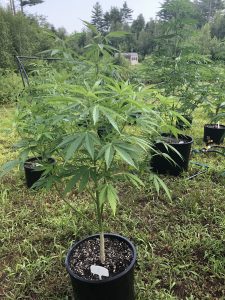