When listening to the radio in December, it’s unlikely to hear holiday songs singing the praises of Krampus: a half-goat, half-demon, horrific beast who literally beats people into being nice and not naughty. Krampus isn’t exactly the stuff of dreams: Bearing horns, dark hair, fangs, and a long tongue, the anti-St. Nicholas comes with a chain and bells that he lashes about, along with a bundle of birch sticks meant to swat naughty children. He then hauls the bad kids down to the underworld. 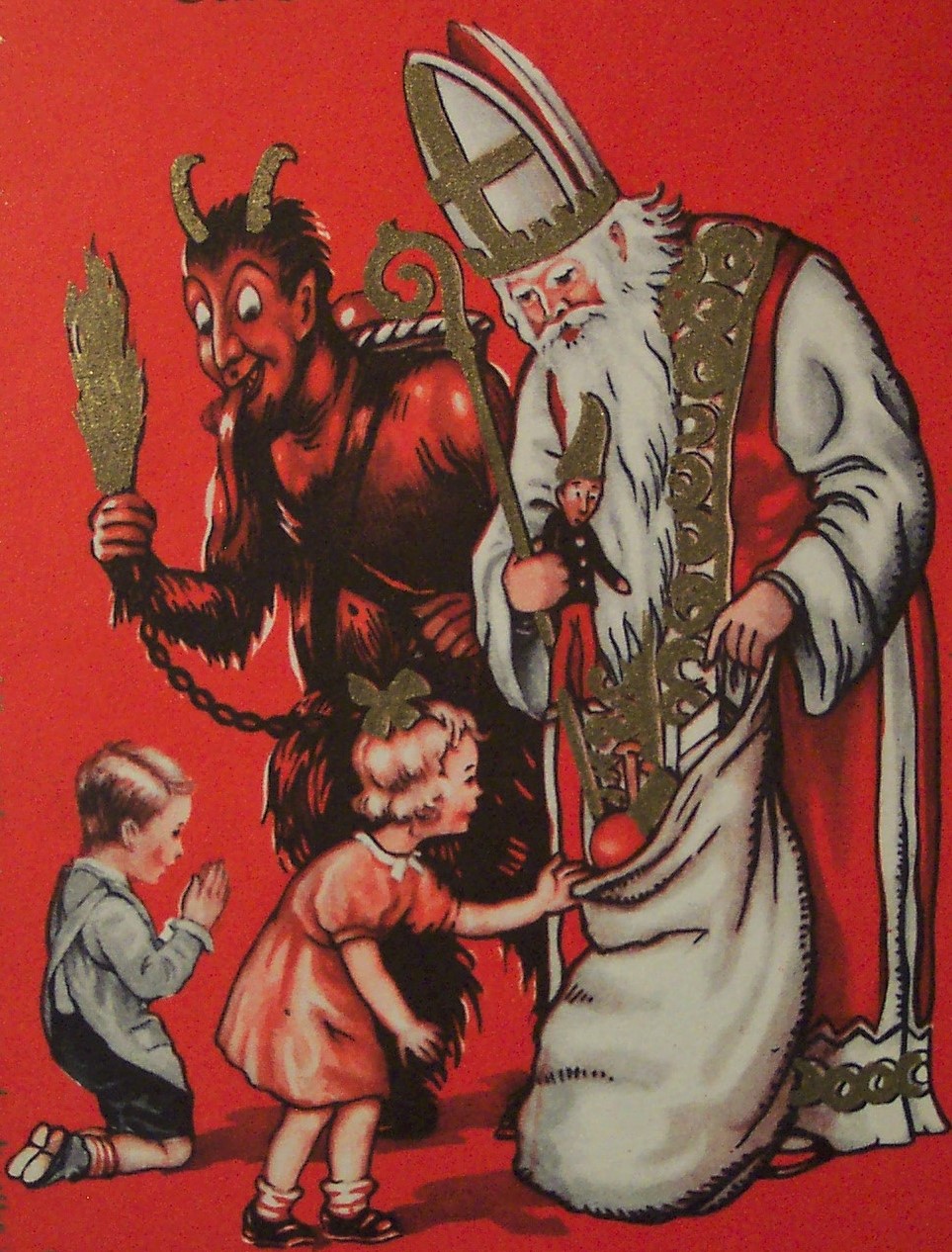 A mangled, deranged face with bloodshot eyes tops a furry black body. Giant horns curl up from his head, displaying his half-goat, half-demon lineage. Behind this terror, a dozen more stomp through the snow of the streets of Lienz, Austria, among a din of cowbell jangles. The creatures dash through the streets, chasing giggling children and adults alike, poking them with sticks, and scaring some with the realization that they were naughty this year. 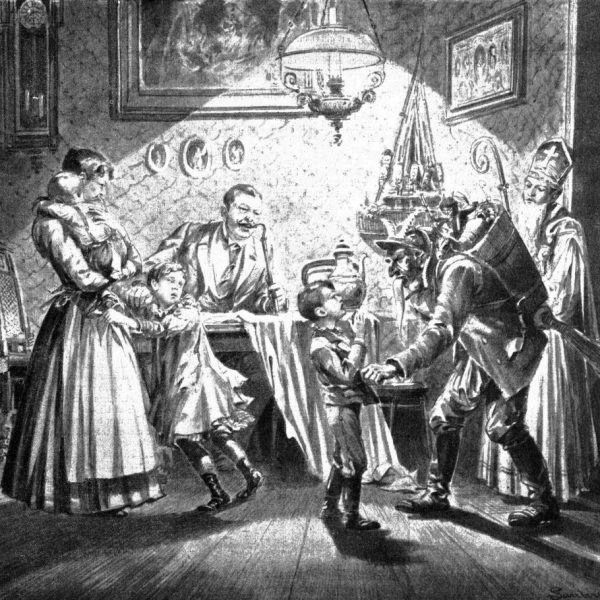 In Catholicism,  St. Nicholas is the patron saint of children. His saints day falls in early December, which helped strengthen his association with the Yuletide season. Many European cultures not only welcomed the kindly man as a figure of generosity and benevolence to reward the good, but they also feared his menacing counterparts who punished the bad. Parts of Germany and Austria dread the beastly Krampus, while other Germanic regions have Belsnickle and Knecht Ruprecht, black-bearded men who carry switches to beat children. France has Hans Trapp and Père Fouettard. (Some of these helpers, such as Zwarte Piet in The Netherlands have attracted recent controversy.)

Krampus’s name is derived from the German word krampen, meaning claw, and is said to be the son of Hel in Norse mythology. The legendary beast also shares characteristics with other scary, demonic creatures in Greek mythology, including satyrs and fauns. The legend of Krampus is part of a centuries-old Christmas tradition in Germany, where Christmas celebrations begin in early December. Krampus was created as a counterpart to kindly St. Nicholas, who rewarded children with sweets. Krampus, in contrast, would swat wicked children, stuff them in his sack, and take them away to the underworld/ hell. According to folklore, Krampus purportedly shows up in towns the night of December 5, known as Krampusnacht, or Krampus Night. The next day, December 6, is Nikolaustag, or St. Nicholas Day, when children look outside their door to see if the shoe or boot they’d left out the night before contains either presents (a reward for good behavior) or a rod (bad behavior). A more modern take on the tradition in Austria, Germany, Hungary, Slovenia, and the Czech Republic involves drunken men dressed as devils, who take over the streets for a Krampuslauf (a local event where people are chased through the streets by the before-mentioned “devils.”) 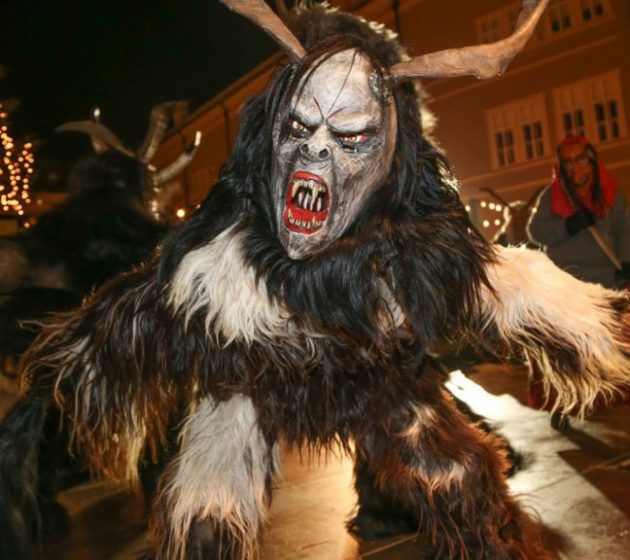 Why scare children with a demonic, pagan monster? Maybe it’s a way for humans to get in touch with their animalistic side. Such impulses may be about assuming “a dual personality,” according to António Carneiro, who spoke to National Geographic magazine about revitalized pagan traditions. The person dressed as the beast “becomes mysterious,” he said. Krampus’s frightening presence was suppressed for many years—the Catholic Church forbade the raucous celebrations, and fascists in World War II Europe found Krampus despicable because it was considered a creation of the Social Democrats.

But Krampus has been having a resurgence over the past few years, thanks partly to a “bah, humbug” attitude in pop culture, with people searching for ways to celebrate the yuletide season in non-traditional ways. In the United States, people are embracing the dark side of Christmas with  Krampus movies, special “Krampus” television episodes. They’re throwing Krampus parties, attending local Krampusnachts (in cities like  Washington, D.C., and  New Orleans ), and running in  Krampus-themed races.  (Read  “How Krampus, the Christmas ‘Devil,’ Became Cool.” ) For its part, Austria is attempting to commercialize the harsh persona of Krampus by selling chocolates, figurines, and collectible horns. There are already complaints that  Krampus is becoming too commercialized and losing his edge because of his newfound popularity. 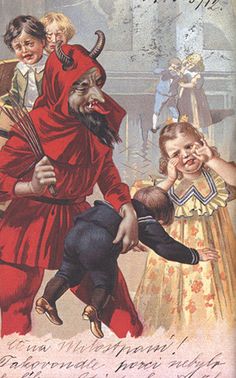 The introduction of mass visual media couldn’t help but sweep the charismatic Krampus up in its wave. When the postcard industry experienced a boom in Germany and Austria in the 1890s, it opened the way for Krampuskarten.

These holiday cards weren’t mean to make you feel warm and fuzzy. Ones marked “Gruss vom Krampus” (“Greetings from Krampus”) showed Krampus stuffing a distressed child into his satchel or preparing to hit one with his bundle of birch sticks. Many of these postcards depicted Krampus going after children with his sticks, leading them away in chains, or carrying them off in his bag.

There were also cards that were a little more adult-themed. Krampus cards in the early 20th century show him punishing children, yes, but also proposing to women. In some cards, Krampus is portrayed as a large woman whipping tiny men with her birch sticks and carrying them off in her satchel. In another, a smiling woman dangles a defeated-looking Krampus in the air, holding his bundle of birch sticks behind her back. For over a century, most Americans probably never saw a Krampus card or even knew who Krampus was. That changed in 2004 when art director and graphic designer Monte Beauchamp published a book of Krampus cards and helped organize an art show inspired by the cards.

Whether or not Beauchamp is primarily responsible for introducing Krampus cards to the U.S., Krampus has since become a sort of ironic icon in America. Etsy has a whole section of items inspired by classic Krampus cards. And if you don’t have time to send cards, you can buy an ugly Krampus sweater to wear to your local Krampus party or Krampuslauf. Krampus’ popularity in the U.S. arguably peaked with the 2015 feature film Krampus, which shouldn’t be confused with the many other low-budget Krampus movies. Although Krampus is relatively new to the U.S., this alpine legend is the original bad Santa.